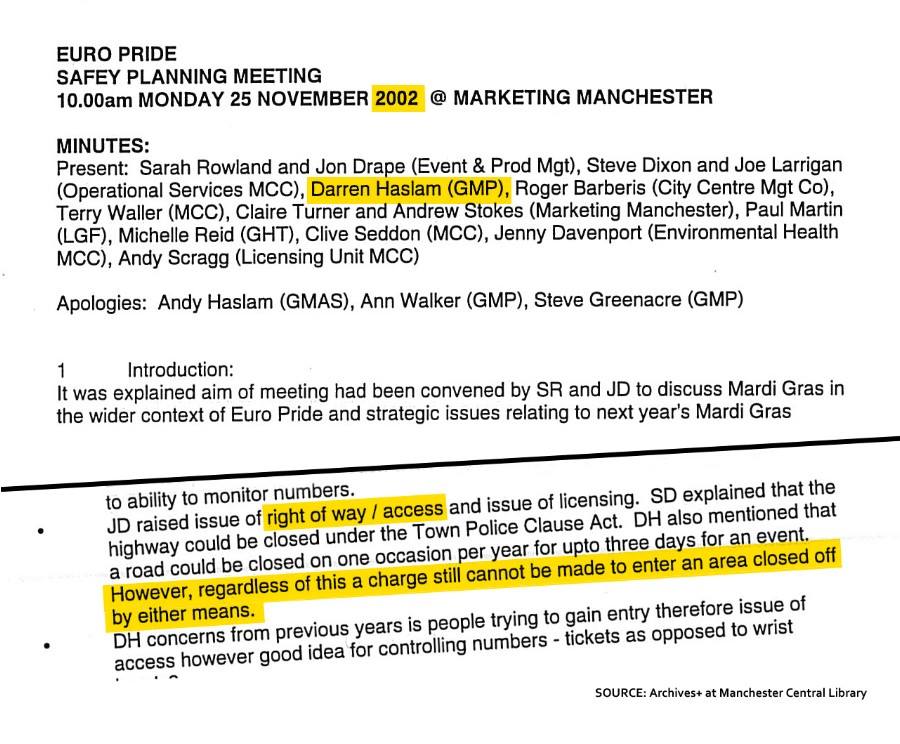 Campaigners have uncovered the minutes of a pride planning meeting that was held in November 2002. Read the full minutes here (PDF).

The meeting was told that two methods could be used to close the roads but that a charge could not be made to enter either way.

Despite this, the following August, the public were locked out from the streets of Manchester's gay village if they didn't purchase a wristband for Europride. That continued every year until 2014 when the campaign group Facts About Manchester Pride blew the whistle on the unlawful practice. The following April the Local Government Ombudsman ruled (PDF) and the game was up.

We have yet to find or hear any explanation about why they went ahead.

The method they went with was the second described in the document: a Temporary Traffic Restriction Order (TTRO) which allows the streets to be closed to vehicles for three days, once a year.

The key thing is that a TTRO only applies to vehicles, not pedestrians. However the City Council even mentioned wristbands in the Orders they drew up each year. In 2015 the Local Government Ombudsman ruled that this had been "unlawful."

Because Pride lasts for four days over the August Bank Holiday weekend, the Secretary of State has to give permission for an extension to the TTRO each year.

There were more shenanigans in 2018. The City Council didn't apply to the Secretary of State until the Friday Pride started. The Order was never approved and the roads were closed to traffic unlawfully for all, or some, of the four day event.

Present at the meeting in 2002 were representatives of Marketing Manchester, Manchester City Council, George House Trust, The Lesbian and Gay Foundation (now known as the LGBT Foundation), Greater Manchester Police and the organising team of Europride (which was renamed Manchester Pride in 2004).

Why was the advice, which seems to have come from the representative of Greater Manchester Police (GMP), ignored? Why didn't GMP stand up for the rights of the public and defend the law?

The misery these organisations and businesses inflicted on residents and some members of the LGBT community is hard to measure. For 12 years those who couldn't afford to buy a ticket or couldn't justify the cost were unlawfully locked out from the streets of the gay part of Manchester during a so-called "pride" event.

It's laughable for this same crowd and others who have ignored this since 2015 to bang on about Tories and Section 28 when this cruelty and mental anguish (and that is no exaggeration) was inflicted upon us by members of our own community and a (neoliberal) Labour council for years.

From 2011, the campaign group Facts About Manchester Pride raised concerns about what was going on and faced an onslaught of abuse. And still it isn't over, as many organisations, media outlets, politicians and public figures continue to stay silent about this.

In their untruthful back-to-front PR and fake news they talk about "inclusion" and the gay village being a "safe haven" when the complete opposite has been true for years. Recently Bloom Street was named as the joint 15th most crime-ridden street in England and Wales and an incredible 61 violent and sexual crimes were reported for the village area during June 2018.

Are these individuals really friends of ordinary LGBT people? Whose interests do they represent?

A treasure trove of documents. The background to this discovery

Some years ago G, one of our campaigners, asked Manchester City Council whether it still had the financial records for Mardi Gras 1999. The year when the event was run from the town hall, headed up by a couple of city councillors, and it raised nothing at all for charity. In fact there's a rumour that it made a loss which was quietly paid off by the Council...

However the City Council replied that the documents had been disposed of. It was within its rights to do that after so many years. Unknown to G, Julia Grant had asked the Council too and received the same response.

A few years later, P, another Facts campaigner, discovered a box at the library archives. Apparently deposited by someone who had a connection with the event. Inside were hundreds of documents spanning several years, including financial records from 1999 and the minutes of the meeting in November 2002.

We made copies in case that box disappears in the future too.

The documents provide a fascinating insight into the spending in 1999. One invoice to Mardi Gras is from the Manchester Evening News for a photograph of Councillor Pat Karney — the chair of the event. It's hard to believe the City Council couldn't provide a free photo of one of its own councillors so an extra £75 could go to HIV and AIDS good causes instead of to the MEN.

This is why there was nothing for charity in the end.