December 9th, 1991 and Manchester's town hall had seen nothing like it. The Christmas Costume Ball was organised by the Village Charity which had been created the previous year. The purpose was to raise funds to help with HIV and AIDS.

Lots of people gave their time for free, including the performers. One of the co-founders of the Facts campaign made a video of the Ball.

This was on the understanding that copies would go on sale to raise funds. But that never happened and, a few years later, someone who had been close to the Charity said there had never been any intention of selling it. 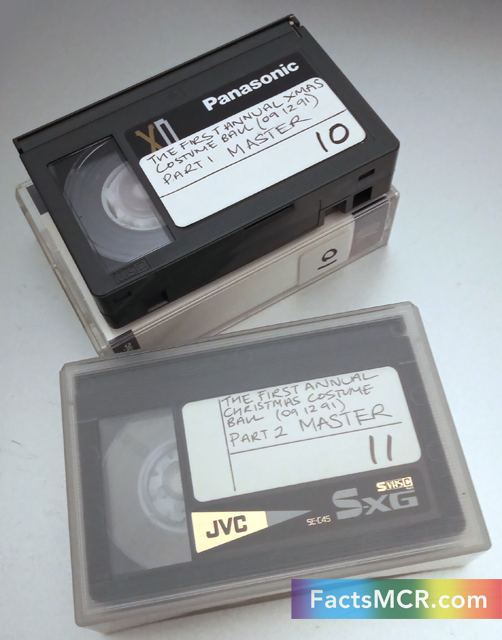 The master recordings of the Christmas Costume Ball were made on an industrial format called SVHS (Super VHS). This gave picture quality somewhere between home video and broadcast TV. And high quality stereo sound.

Now, with equipment disappearing, there are just a few more years remaining in which to get tapes transferred. Soon even the once-ubiquitous VHS will pose a problem, let alone less-popular formats such as SVHS.

And it isn't only home recordings that are being lost. Recently it came to light that the broadcast tapes of the famous Channel 4 series of the 80s "Out On Tuesday" (later called just "Out") are nowhere to be found...

The two videotapes of the Ball are in great condition. Neverthless, the creation of a digital master gave the chance to fix some minor issues. 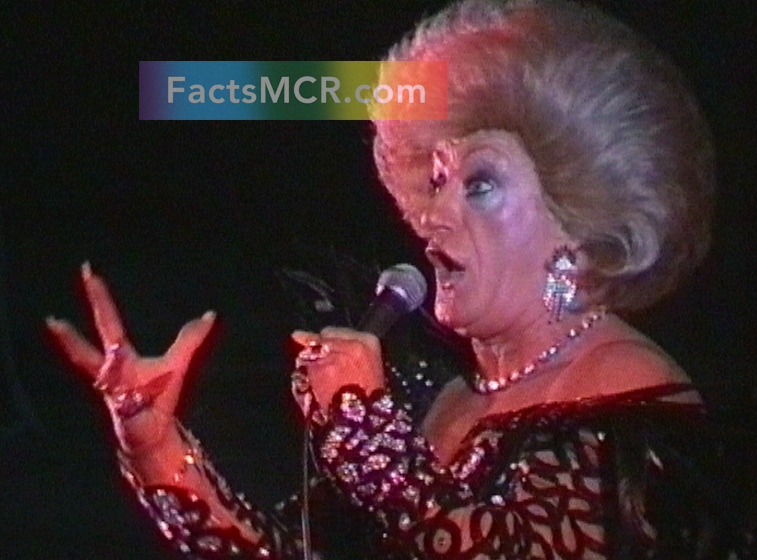 FooFoo Lamarr in the video footage which runs for 120 minutes. You can get a sense of the quality of the new digital transfer from this image.

The video box that was created for VHS copies of the tape in 1991. Designed on an Amstrad PCW! But in the end they were never put on sale.

In the past, video editing was always a copying process, with inevitable loss of picture quality. But with a transfer to uncompressed digital there is no such loss. We have equipment to stabilise the video signal and we can make repairs frame-by-frame if needed.

Manchester Pride has received many tens of thousands of pounds of Heritage Lottery Funding but doesn't seem to do anything like this. Despite a budget of zero, we think we've obtained the best transfer possible from these tapes.

One day in the distant future the video will probably end up in the North West Film Archive or somewhere similar.

If you have any information about Rozie-O and the Hellcats who appeared at the Christmas Costume Ball, get in touch. We would like to know more.

Our 2021 Factsheet (PDF) about Manchester Pride has been published. Read about your right to access the Gay Village without buying a wristband, gossip, history & opinion about the current fundraising controversy.

Our factsheet from 2019 is still well-worth a look. It has quotes and an article about police involvement. Download it as a PDF here. See our factsheets page for other years.