In letters in the weeks before Manchester Pride 2014 the Department For Transport gave clear instructions about pedestrian access to premises during the Pride event. The public and residents had been unlawfully obstructed from pavements every August since 2003.

This man had purchased a wristband. We understand his only "crime" was to tell someone else that they had the right to access premises without a band. As a result he was set upon by Manchester Pride's guards as he stood on the corner of Sackville Street and Bloom Street. A public pavement. 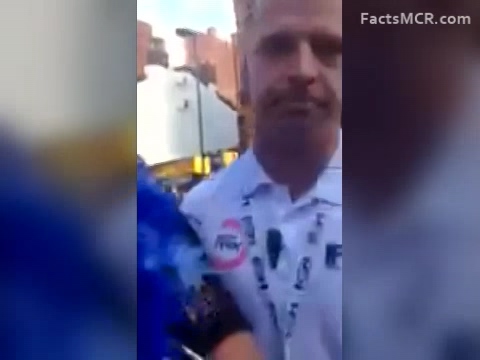 As you'll see in the video, the man, who we understand is partially sighted, was dragged along the street to outside the fenced area. He was forced to the ground and held there and at this point the video ends. His wristband was cut off.

Greater Manchester Police is paid tens of thousands of pounds by Manchester Pride. You can see that police officers watched and did nothing as the assault took place. If the man had done anything wrong it was a matter for the police.

You will hear the man say that he and his mother intend to go to Napoleons bar.

This happened on a public pavement. The man had every right to be there and to make his way to Napoleons ("premises") as stated by Department For Transport. Manchester Pride's security guards had no powers nor right to touch him. This was an assault and a criminal offence. A gay man assaulted at a pride event in Manchester for speaking up about his civil rights.

The incident happened at 14:22 on Sunday 24 August 2014. The previous day there was a protest at the Whitworth/Sackville Street gate. Pride, Police and Manchester City Council were fully aware of the issues and the law.

The Local Government Ombudsman ruled the following April (2015) and confirmed what the Department For Transport had written.

Four years after this incident took place there has been no public apology from Manchester Pride for misleading the public about wristbands since 2003 and for incidents like this one. People continued to buy bands unnecessarily out of ignorance.

Mark Fletcher, the current CEO of Manchester Pride was in the role when this assault happened. Recently he has been appointed to the LGBT panel that has been put together by Greater Manchester Mayor Andy Burnham. Is Mr Fletcher an appropriate person for the Panel, when he heads an organisation that has been responsible for incidents like this one as well as the wristband scam?