Archives reveal "regular, ranting bigotry about gays" in the pages of the Manchester Evening News

In 1989 the MEN called for an "awful" floral display in Piccadilly Gardens commemorating Stonewall to be "destroyed".

One of our elves has been hard at work digging through material in the library.

An article in Scene Out magazine, August 1989 issue, reports on how a floral tribute in Piccadilly Gardens to celebrate the 20th anniversary of Stonewall (the origin of gay pride), was sprayed with weedkiller by vandals. It happened after an editorial in the Manchester Evening News suggested that the display should be destroyed.

The display had been created by Manchester City Council and carried the slogan "Lesbian and Gay Pride". The MEN reported how office workers said it was "disgusting"and "awful". An editorial suggested that perhaps the city fathers should "order the destruction of the blooming thing". Vandals then did so. 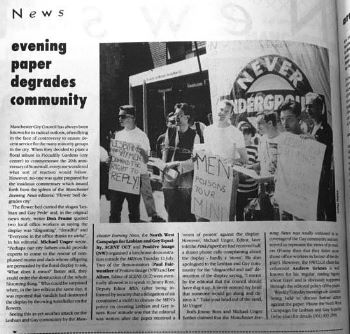 "MEN poisons your mind" states one banner at the protest outside the paper's HQ on Deansgate.

Scene Out describes the coverage as "yet another attack" on the Lesbian and Gay community by the Manchester Evening News. The editor claimed that the paper was "totally unbiased" in its coverage. However campaigners highlighted one of the MEN's columnists of the time and accused him of "regular, ranting bigotry about gays".

There was a protest outside the offices of the MEN on Deansgate (shown in the photo). Paul Fairweather being one who was there. Two of them were invited in to speak to the Deputy Editor after being informed by security that six was considered "a mob".

This will all be news to younger readers. But some of us older LGBT people have a long memory. Some will say it's more than 25 years ago. But there are such double standards. The Tories are still slated for Section 28 on a regular basis, while other homophobia from the time has been airbrushed away and despite £250,000 of Heritage Lottery funding having been spent on "LGBT history projects" in recent years.

The Manchester Evening News was always something of a rancid tabloid. In the late nineteenth century it referred to black people as "n*****s" and "darkies", whereas its sister paper The Manchester Guardian (now known as The Guardian) used the term "black" even then.

An example can be found in a collection of articles from the MEN that were published as a book called Criminal Manchester. In one house the journalist finds a black man who has toothache...

From "Criminal Manchester" an 1874 reprint of recent articles from the Manchester Evening News. One hundred and fifteen years later the MEN was still pandering to its more hateful readers, inciting the destruction of a harmless flower display and publishing a homophobic column.

Consider too that until 2010 the MEN was owned by the Scott Trust along with The Guardian. It raises questions about the sincerity of publishers and whether self-proclaimed "values" are genuine or just a marketing tactic.

These days the Manchester Evening News poses as a supporter of LGBT people and is a "media partner" to Manchester Pride. But, at the same time, it continues the dirty tricks when it comes to LGBT campaigners who are actually fighting for lawful rights -- such as those surrounding the illegal street closures during that same corporate Manchester Pride. And on that same note where is Councillor Fairweather now?

In its response to our naked streak spoof, MEN owner Trinity Mirror wrote that the paper was "proud of its longstanding support of Manchester Pride". But you can see that, in 1989, as the commmunity organised HIV fundraising jumble sales on Canal Street, and years after the first pride had taken place in the city, the Manchester Evening News deliberately degraded our community.

Thanks to Archives+ at Manchester Central Library where the Scene Out magazine was found.