The mystery of the missing traffic order

Were the roads closed to vehicles unlawfully during Manchester Pride 2018?

It seems that no traffic order was in place for some of the four-day Manchester Pride. We and others are in the process of finding out.

On the Tuesday after Manchester Pride finished, campaigner Alex received an email from the Department For Transport (DFT). It explained that the DFT had only just received a Traffic Order from Manchester City Council that morning. So the Secretary of State had been unable to approve anything for the Pride weekend. 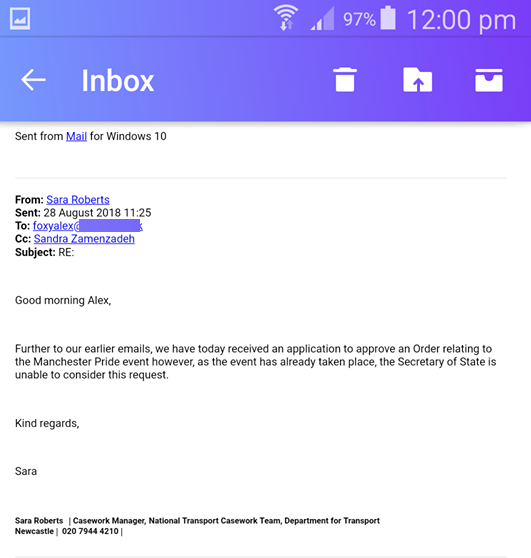 Because Pride lasts for longer than three days the Secretary of State must give approval for the road closures. But this year didn't.

On Wednesday 22 August before the Pride weekend, by email, Geoff received a letter from the Deputy Chief Executive of Manchester City Council. It explained that the Council was still adjusting the Order (less than two days before the street closures were due to begin) and that he would receive a copy when finished.

Finally on 13 September a copy of the Temporary Traffic Restriction Order (PDF) was received along with the City Council's approval of the making of it (PDF).

In the accompanying email the Council writes:

"The Council made the TTRO by using powers conferred upon it under section 16A of the Road Traffic Regulation Act 1984 ("the Act"). This is the power used by the Council, in the last few years. By virtue of 16B of the Act, such an order can only be in force for three days. If any longer period is required, then the Secretary of State should agree to such longer period, before the order is made. Because every year the organisers of Manchester Pride require a 4-day closure of some of the highways, in order to enable them to clear litter and remove the equipment, the Council always obtains the Secretary of State's consent for the extended period of operation of the TTRO.

"Unfortunately, this year the deadline to submit this application was missed and although the request for the Secretary of State's consent was submitted, it was too late. Nevertheless, this omission does not render the TTRO invalid or ineffective, at least for the first three days of its operation.

"We will ensure that such an omission will never happen again in the future." 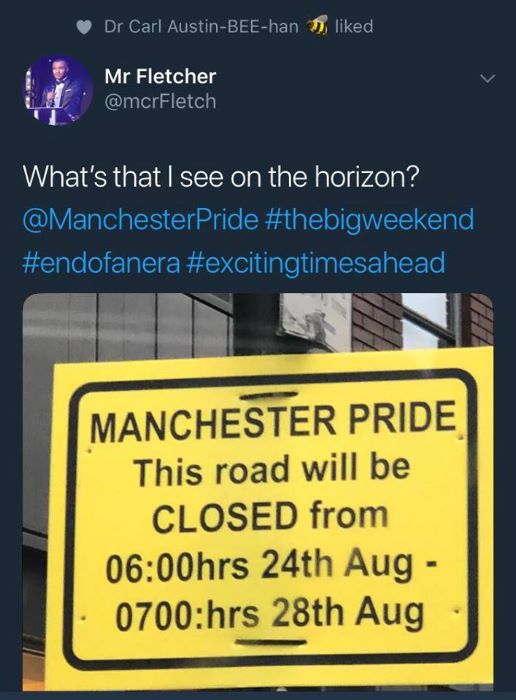 On 20 August, Mark Fletcher, the CEO of Manchester Pride, tweeted this photo of a road closure sign on a lamp post. The dates on this don't match those in the Traffic Order which states:

"1. This Order shall come into operation on Friday 24th August 2018 and may be cited as the City of Manchester (Manchester Pride Event 2018) Temporary Traffic Regulation Order 2018. The Order will be operative until 24.00 hours on Monday 27th August 2018."

Note that at the top the Order states it has been made "with the consent of the Secretary of State". This is untrue.

For several years campaigners have had concerns that the Order was being left until the last minute, giving the public little or no time to see it before the road closures. Why was Manchester City Council still "adjusting" the Traffic Order on Wednesday when the roads were due to be closed on Friday? Considering the history of illegal obstruction of pedestrians, it's extraordinary that this was allowed to happen in 2018.

There are many more questions. We'll bring you answers in due course.