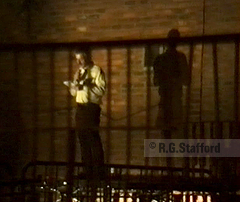 A touching speech by Paul Orton of The Village Charity (and Clone Zone) on the Monday night of the 1991 August Bank Holiday event. This was followed by a fireworks display which ended with "Manchester Cares" spelt out. That is what it was about in those days: caring and fundraising. It wasn't a pride, festival, tourist event, corporate money maker or smoke and mirrors trick charity to get people spending.

Note: this is part of a new transfer of the master tapes, done for the 30th anniversary this month.