What happened? Here's what we live blogged during the weekend.

From M: "the good news is, unlike last year when no one seemed to know what was going on, a lot of people are talking about the wristband issue and money. I've been telling anyone who will listen that it should be GAY Pride again. Very important word missing. During the vigil an angry man shouted 'where's our money going?' during a speech on stage about the amount of money the 'community fund' raised. We had no issues entering at 8pm by Chorlton St gate, but security did ask if we were going to the 'Vidual'. No wristbands were asked for unlike last year when I was refused entry to the Molly House by the doorman."

Sunday 15:00 following reports of people being refused entry without a wristband to go to premises we understand that a representative of Manchester City Council (SD) called Manchester Pride and told them their guards must allow access. We're told that quite a large number of people are in the gay village without a band, having made their way to the bars they usually attend.

If security guards try to prevent you from entering the gay village, remember you have a legal right to walk to premises that can't be reached by an alternative route outside the fences. So be sure to say to the guards that you know you have that right and that going to a home or business is what you are there to do.

As for getting into a particular bar or club once you reach the door, that is entirely up to the owner as they are private premises. There are bars that won't admit you without a wristband and others that will. After Pride is over you can decide whether you want to give custom to those businesses that refused you!

When it comes to the "event areas" which are on private property such as car parks, you can't expect to get into those and our campaign isn't about that. But remember you CAN go to the HIV/AIDS Vigil on Monday night in Sackville Park without a wristband as usual.

Saturday 23:55 MA says: "we didn't get in. They said it is a ticketed event, I had been misled. The police ignored me and walked off."

Saturday 15:40 Fred reports: "Successfully just entered the Sackville Street entrance without a wristband." He says he was challenged by security guards. "But I just asked if I HAD to pay to enter the area and was fairly insistent."

Friday 23:45 Deirdrie (not his real name) writes: "We went to gate 6. Friend asked FGH Security. He said needed a ticket. I wanted to try to get in but he didn't want to. I didn't push it. There was 4 police there and a van. Wasn't prepared to do anything on my own."

So there we have someone intimidated into not going to premises.

Friday 21:15 from Paul J who is now in the gay village: "They asked me for my wristband and I said 'no' and just kept walking and they didn't come after me." 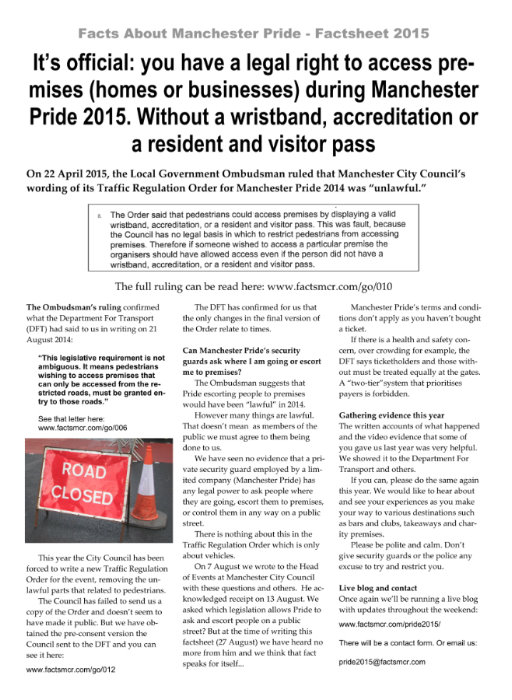 Our 2015 Factsheet is here to download as a pdf document:

It's official: you have a legal right to access premises (homes or businesses) during Manchester Pride 2015. Without a wristband, accreditation or a resident and visitor pass. Providing they can't be reached by an alternative route.

On 22 April 2015, the Local Government Ombudsman ruled (PDF) that Manchester City Council's wording of its Traffic Regulation Order for Manchester Pride 2014 was "unlawful."

Please send us details of your experiences of accessing premises during Manchester Pride 2015:

Videos that show what happened are particularly useful.

A year ago: we've assembled video evidence with some notes at this link.

And you can see our update page from 2014 here.