LIVE BLOG: Manchester Pride 2021 - our legal right to walk into the Gay Village

Let us know your experience of getting into the gay village and being served. Our email form is here. Also we have a link where you can upload video directly to us (ask for it).

Manchester City Council staff will be on duty to record any incidents and help you if you have a problem with access. This year the number to use depends on the day and time. Numbers are only for access issues.

If someone is on duty the number to call will appear here.

Or, if you see a police officer, ask for the incident to be recorded and note down details yourself.

23:59 Thank you everyone who helped over the weekend. Still let us have details if you experienced an incident and we'll add those.

01:00 On a Facebook group, Nick says "entered via Princess St, was asked if I had a wristband, I replied that I don't need one, four of us walked in without any further challenges. Bought drinks at both the Molly House and No1 Canal St. I will never buy a wristband again and will contribute to the charities as I see fit."

23:50 Via Paul from someone who wants to stay anonymous. 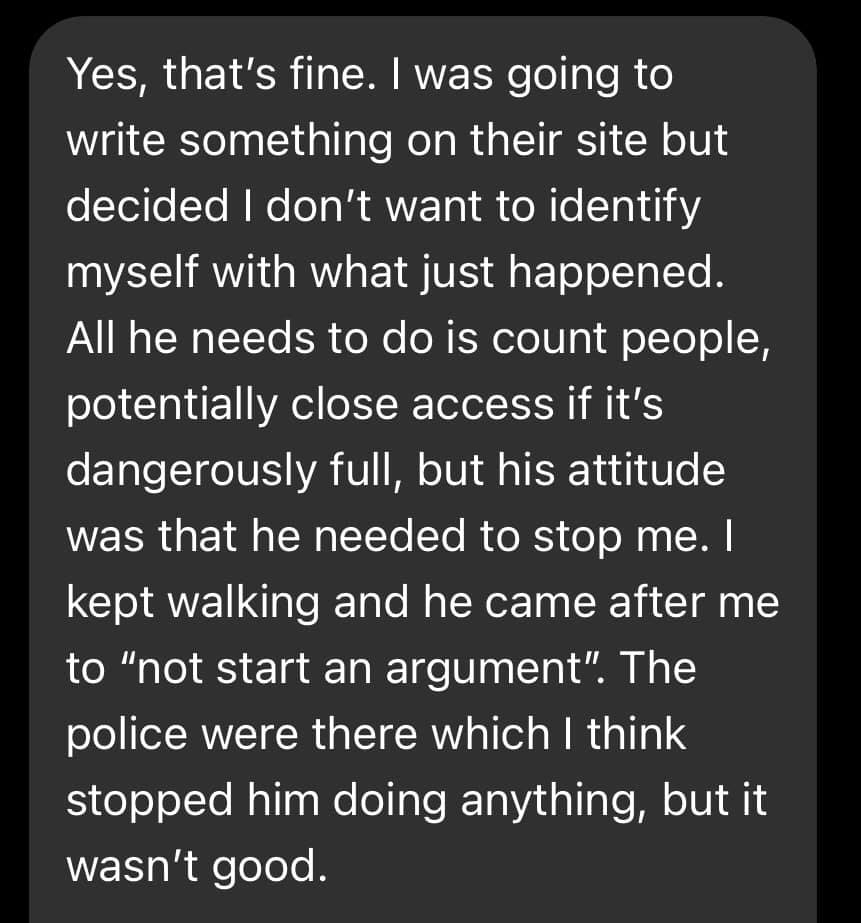 11:30 From Matthew "The security staff on the gates are asking people to show their pledge band. I've witnessed several passers by looking puzzled and intimidated. 10.30 on Sunday."

06:53 Saturday evening was very quiet from our point of view.

23:15 A gay man says he was assaulted, subjected to theft and verbally abused at the protest on Saturday. We understand he was wearing a t-shirt for the LGB Alliance — the gender critical charity that focuses on lesbians, gay men and bisexuals.

22:30 "This has been hideous," says this man in a comment on Manchester Pride's Facebook page. He describes how he gave up queueing and didn't need a wristband to get into the Village bars anyway. "Totally pointless waste of money will never bother again," he concludes. 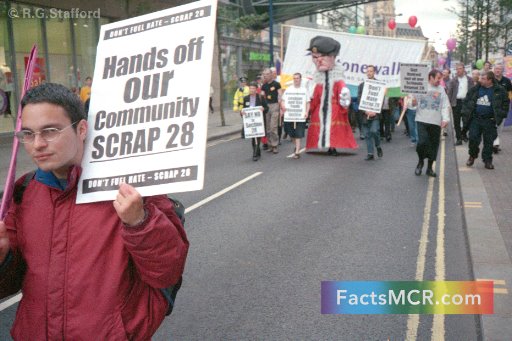 21:10 The march today seems to have been a success. Well attended and we think possibly the biggest since one about Section 28 in 2001. It was the first item on BBC North West Tonight (no mention of wristbands though). Before it, Manchester Pride made an odd post.

In typical overbearing fashion, Pride seems to think part of its role is to oversee third-party protests alongside the "local authorities."

Any protest helps to raise awareness. But, despite the success today, we have some concerns... It was reported the organisers met with Manchester Pride. After many years of campaigning, we don't believe the people who control Pride will ever bring meaningful change. A few tweaks won't be enough. The problems are systemic. The whole structure must be swept away and organisations and people who have failed the community over the years should be sidelined. Then something new can grow.

11:28 By email Nick writes "Checked out various entry gates to the village yesterday. Most seemed to be asking to see wristbands. One by Thompson Arms did seem to let people in without after suggesting you couldn't be served at bars without one, and pointing people to the ticket office. However we entered and had a great night, not a single bar we went to asked for wristbands and we donated to a couple of charity buckets on entry." He says he got into Bar Pop, Eva, Iconic and used a few outside. The issue at the agtes was at around 7pm. 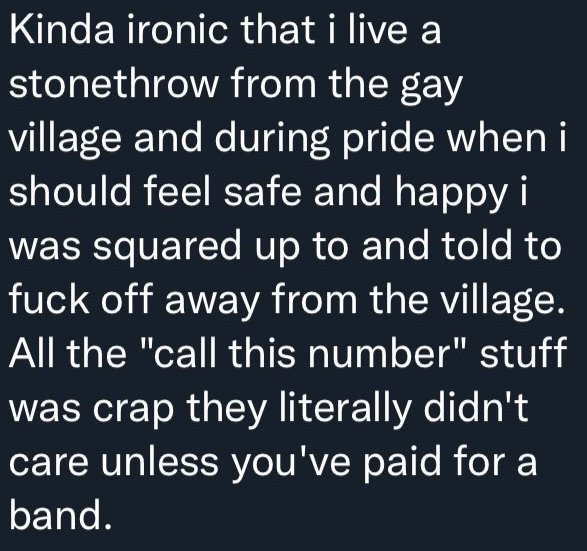 We contacted him to find out more. He told us "yes it was with one of the security and i did not have the number at the time so did not call the number. It was a little intimidating so didnt really want to challenge it and just went home." 'A' told us he couldn't identify which gate "I've left since then and tried not to think about it. It was after 7pm on Friday but that's about as much as I recall. Pretty much auto-piloted home to bed after it."

23:27 A protest has been organised for tomorrow, not by our campaign. See @MCRPrideProtest on Twitter. The organisers write "Meet 11:30am at Whitworth St West by Deansgate Tram Stop to leave at 12:00. Please bring water, wear a facemask and follow our Marshalls instructions." Here's the route.

22:50 Matty is on the scene in the Village and shot some photos. He says areas that require a wristband are dead. As there's no Pride Live event at the Medlock Street site tonight this might not be good sign for Manchester Pride?

22:15 Claire G. posted photos in a Facebook group showing long queues near the Minshull Street courts. Due to having only one box office she says. "It goes around the block," she adds. Dale replies "has done all day." 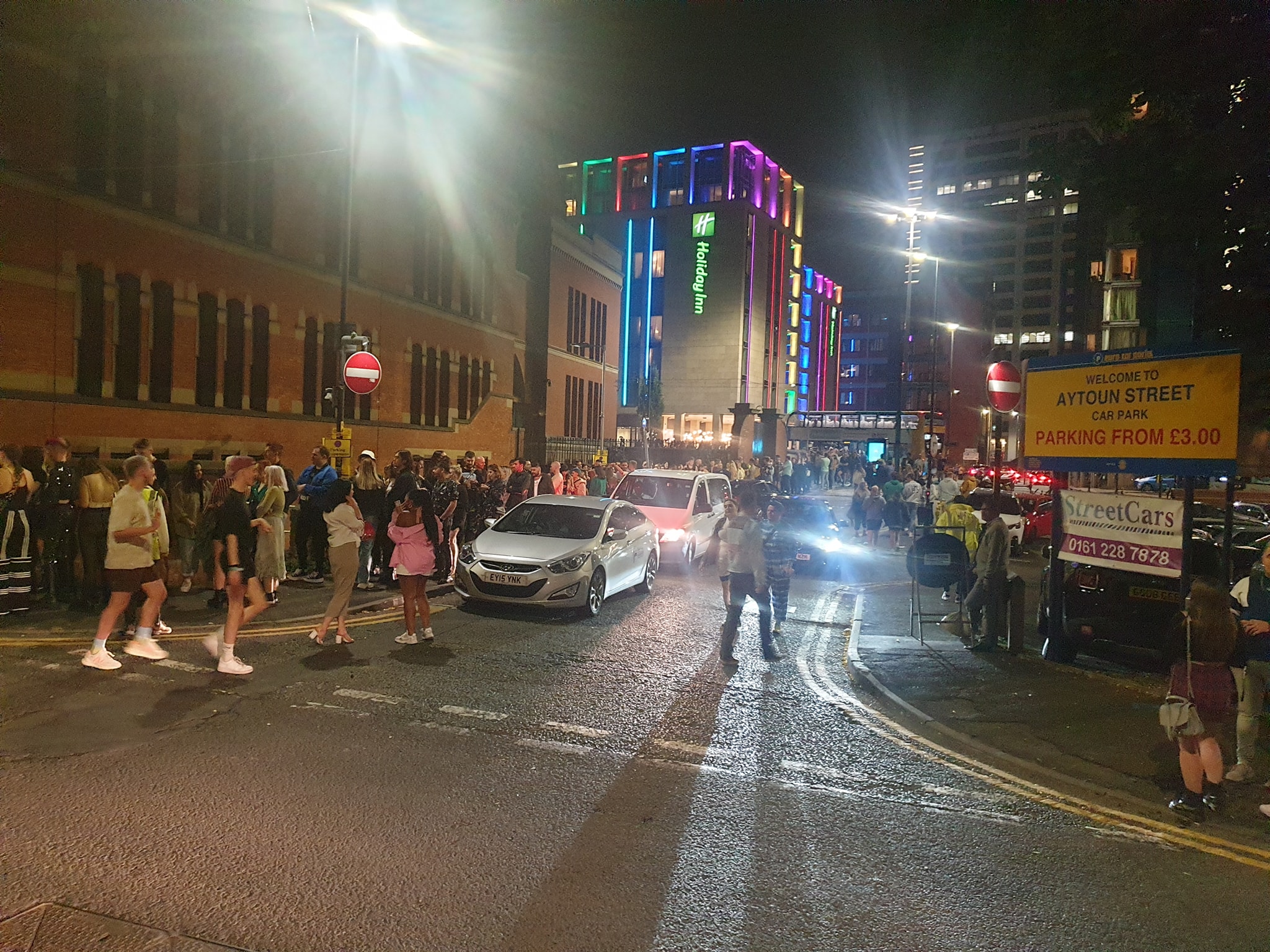 21:56 Greater Manchester Mayor Andy Burnham continues to look the other way when it comes to the wristband situation.

21:30 According to this tweet as soon as the event started people who didn't have bands were being unlawfully turned away.

At 15:00 the Minshull Street end of Canal Street was fenced off completely. Kirsty raised the issue with the City Council. The fence was removed but with the pavement itself still obstructed. A similar huge fence is across Sackville Street at the side of the Gardens with a gap for pedestrians.

20:00 Maurice reports "Just entered via New Union gate, didn't ask for wristbands but did ask to look in my bag. I politely said no, he asked again, I said 'it's a public right of way.' I think his co-guard clocked I was filming and just waved me through."

13:00 Welcome to our 2021 live blog. We'll be updating this throughout the bank holiday weekend. We expect to get going tonight around 8pm.