LIVE BLOG: Manchester Pride 2022 - our legal right to walk into the Gay Village

Let us know your experience of getting into the gay village and being served during the Manchester Pride weekend. Our email form is here. Also we have a link where you can upload video directly to us (ask for it).

We have a pop-up Facebook group during the month of August.

15:20 That's it for our live blog for this year. Thanks to everyone who provided information one way or another.

Things certainly seem to have moved on as far as access without a wristband is concerned. All concerned seem to have acknowledged the reality finally. It only took seven years since the ruling by the Local Government Ombudsman!

In the run up to the event it was claimed that all bars and clubs had agreed not to serve those who didn't have a wristband. But, as always, that wasn't the case.

This year there was no "Live" music event, just the gay village — as in the distant past. Will the various criticisms this year lead to calls for the event to move elsewhere?

There have been these issues with the capacity of the gay village since the 1990s. One solution is for the organisers to control the number of people who turn up. They can do that by reducing marketing and publicity and making the event less appealing to the mainstream population. It's what Julia Grant did in 2000 and 2001 with GayFest.

In some respects Manchester Pride is already doing that with its focus on intersectional and niche themes. But do these appeal to such a small audience (even within the LGBT community) that they won't sustain the event and organisation? Does Manchester Pride still have eleven full-time employees (see the 2020 accounts)? It's hard to see how the current business model and economic situation can support that, going forward.

13:00 Once again there has been criticism that last night's HIV/AIDS Vigil was used for political purposes, with not enough focus on the people we lost due to the virus. 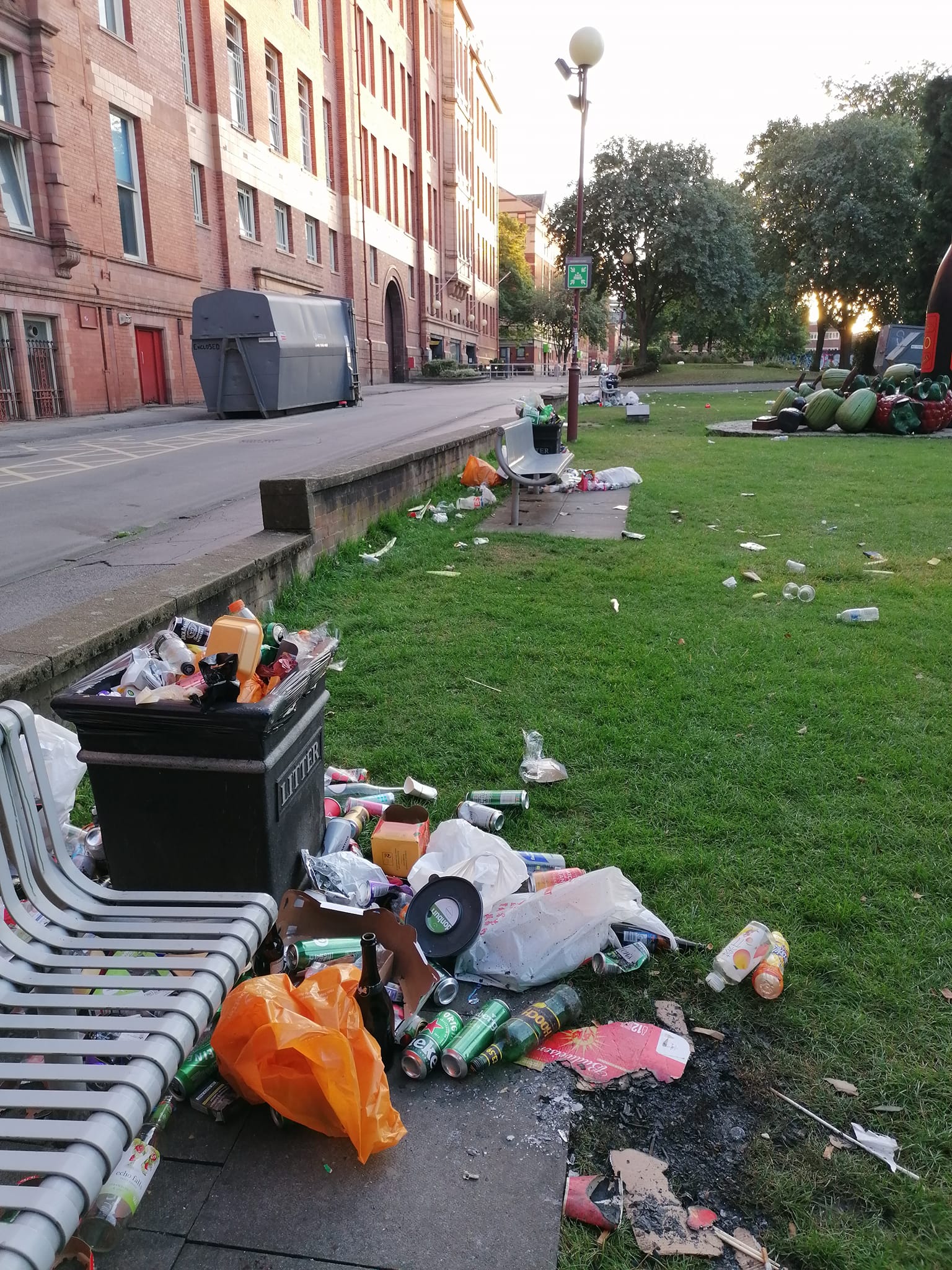 08:15 Some residents are very unhappy about the amount of litter that has been left around the area. Despite complaints and a meeting with Manchester Pride in 2019 and a reminder last week the situation has happened again. And there is "outrage" about the amount of plastic cups left everywhere, in the Manchester Evening News.

18:00 The transgender memorial tree in Sackville Park was set on fire yesterday. Not the first time it has been vandalised. Also it has "been used as a urinal by dozens of people" according to one report. There have been complaints about lack of sufficient toilets. But this was an issue at Mayfield Station a couple of years ago too, which suggests it's poor planning and organisation by Manchester Pride. 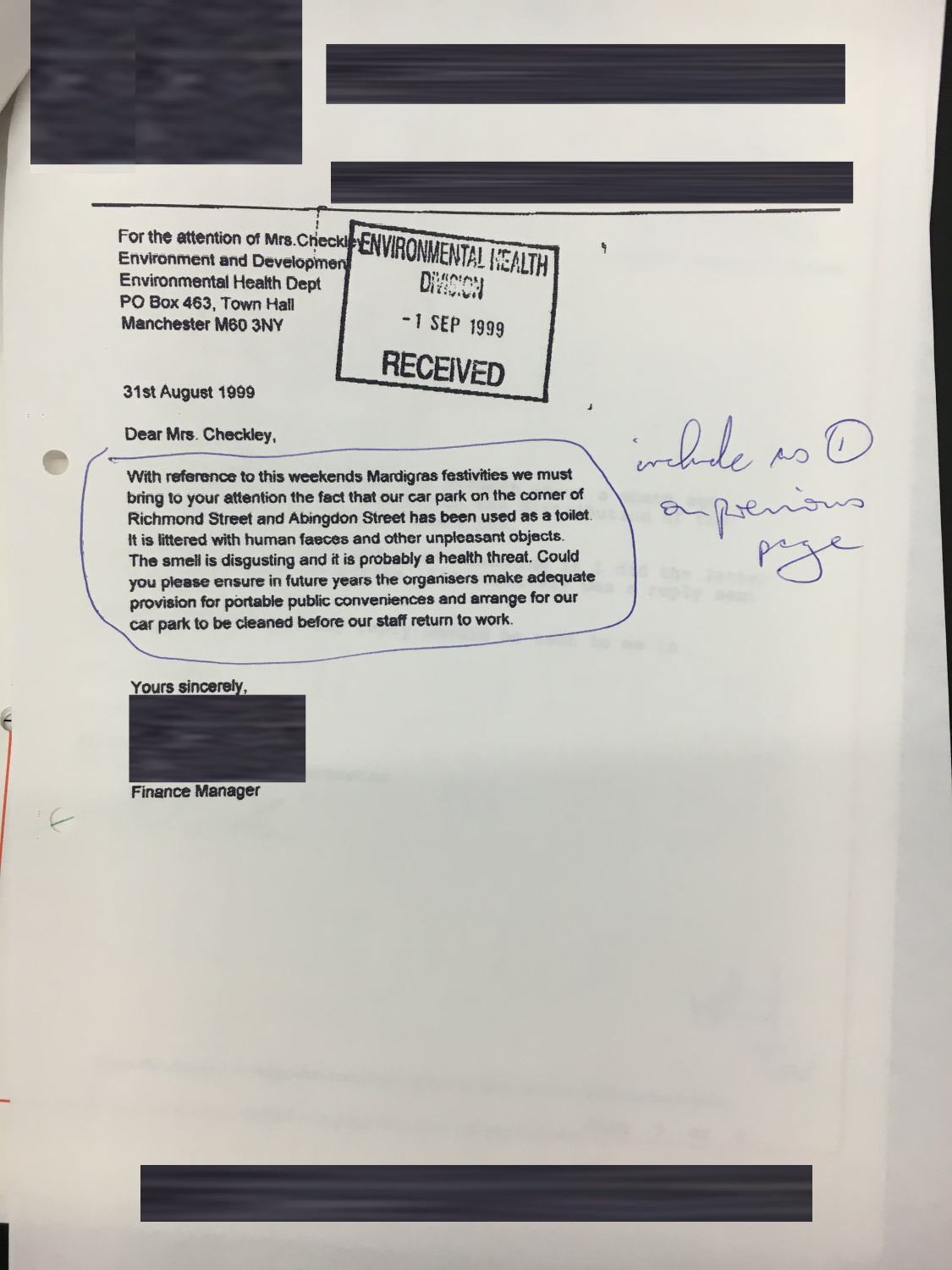 One of the documents we found in a box in the Library Archives is a letter from a local business complaining about similar issues following Mardi Gras 1999 (the first with the village fenced entirely with wristband entry).

22:00 a large number of people who wanted to see Spice Girl Mel C have been turned away from Sackville Park because it was full to capacity.

21:30 According to Ryan a 12-year-old child was refused access to a toilet near the main stage area today because she didn't have a wristband. 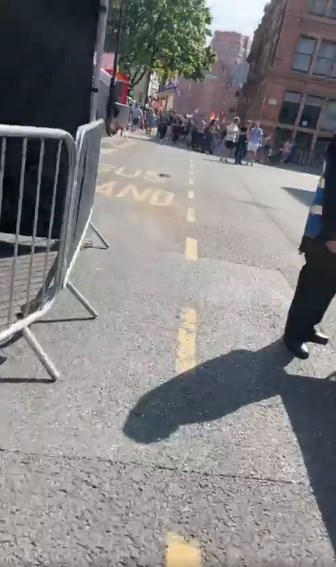 13:35 Matthew recorded video as he walked into the gay village at the Princess Street and Chorlton Street gates. He had no issues walking in but says one steward "got upset with me taking pictures". However the stewards have no power to prevent people from taking photos in a public place. Even the police can't do that.

22:30 Jones writes on Facebook "Something I observed today those worrying about not having bands. Pretty much every bar had an outside hut serving beers, no doubt they wonât be checking for bands."

20:00 This year even the Pride-brown-nosing Manchester Evening News has an article about "The bars and restaurants where you can celebrate Manchester Pride without a wristband."